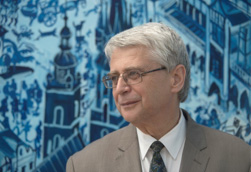 Jacek Purchla (b. 1954 in Krakow) graduated in Economics and Art History. He is a Professor of Humanities (professor ordinarius) and a member of the Polish Academy of Arts and Sciences. He is the head of the Department of Economic and Social History and the UNESCO Chair for Heritage and Urban Studies at the Krakow University of Economics, as well as head of the Centre of European Heritage in the Institute of European Studies at Jagiellonian University.

His research areas are urban development, social history and art history of the 19th and 20th century, as well as the theory behind and the protection of cultural heritage. He is the author of over four hundred academic works, including a number of books. From 1990 to 1991 he was vice-president of the city of Krakow. He was the founder of the International Cultural Centre and has been its director since its inception in 1991. He is a member of many organisations and associations, including the Europa Nostra Council in The Hague, the Comité international d’histoire de l’art (CIHA), the Advisory Council of the Anna Lindh Euro-Mediterranean Foundation for the Dialogue between Cultures and the Art Studies Committee at the Polish Academy of Sciences. Additionally, he is an expert for the European Commission in the European Heritage Label project. He was chairman of the Monument Preservation Council at the Ministry of Culture and National Heritage (2000 –2016). Since 2015, he has been President of the Polish National Commission for UNESCO. In 2016, he was elected Chair of the 41st session of the UNESCO World Heritage Committee.