The 41st Session of the World Heritage Committee in Cracow (2-12 July) will be accompanied by charity fundraising for the people of Aleppo. The collection is planned during the session (2-12 July) and during the concert at the Volhynia Boulevard (Bulwar Wołynski) on July 9, with musical performances by artists including Kasia Kowalska, Sebastian Karpiel-Bułecka, Dariusz Malejonek and Halina Mlynkova.

During the fundraiser, the charity text message number will be active: 72 052, type “SYRIA” (PLN 2.46 including VAT).

The fundraiser is under the honorary patronage of the General Conservator of Historical Buildings prof. Magdalena Gawin. Caritas Polska is the organizer. 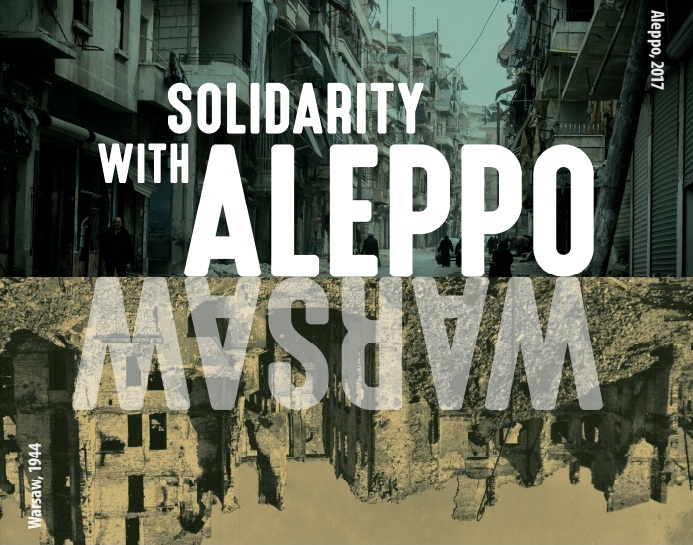 Reconstruction of the historical center of Warsaw - The Old Town and The New Town and the Royal Route was a project without precedent in history.

In 1980, this collective effort made by the residents of the capital, art historians and conservators was appreciated by World Heritage Committee - the historical city center was entered onto the world heritage list.

It seemed the reconstruction of Warsaw’s monuments has become a thing of the past and is no longer in the international spotlight. Today, this has changed significantly, and the reason is the deterioration of cities - mainly Aleppo. The question is how to rebuild a city, so it can appear on the UNESCO forum again. Plans concerning the future rebuilding of Aleppo have caused UNESCO to once again focus on Warsaw. Poles experienced similar hardship having their city completely destroyed, which is why we will share our skills and experience in reconstruction, so that in the future, Aleppo can rise from ruins just as Warsaw did. - said Deputy Minister of Culture Magdalena Gawin.

The reconstruction of The Old Town and the entire city would be impossible without the immense commitment of all Poles. Writer Leopold Tyrmand described the postwar years in his novel “Bad”: “One of the philosophers has calculated that at the time Varsovians breathed in four bricks per year. Varsovians breathed construction - it was no metaphor, but a heavy, dusty, brickish truth. You had to really love your city to rebuild it at the cost of your own breath. Maybe that’s why, rising from rubble and ruins, it became its same old self, the eternal Warsaw - despite new street shapes and building contours - Varsovians gave their own breath to breathe life back into its brick body.”

The story of Warsaw is particularly important in modern times. Today, with war raging in Syria, Warsaw is a positive message, a symbol, which shows that ruins don’t have to  mean the end of a city - they are the beginning of reconstruction and the return to normal life.

The current situation in Aleppo is dramatic. The eastern part of the city is destroyed in over 80%.  Shelling of west Aleppo continues. There’s been no electricity for 2 years. The residents buy it for high prices from primitive generators set up on sidewalks. They can afford lighting a single light bulb and using the washing machine. There is not enough food, medicine, or access to running water. Small children, whose parents can’t afford milk, food, or warm clothing are in an extremely difficult situation. - said Paweł Kęska, spokesperson for Caritas Polska.

SOLIDARITY WITH ALEPPO - HOW CAN WE HELP?

Join us for the “Solidarity with Aleppo” concert, which will take place on July 9 at 21:00 on Volhynia Boulevard in Cracow with performances by artists including: Kasia Kowalska, Sebastian Karpiel-Bułecka, Dariusz Malejonek, Halina Mlynkova, Marek Piekarczyk, Milo Kurtis and Ray Wilson.

Funds collected during the fundraiser will be forwarded to Caritas Polska and sent to help the people of Aleppo.

Caritas Polska is a charity institution founded in the 1920s and reactivated in 1990 after the downfall of communism in Poland.

The organization is active in Poland and abroad: organizing fundraisers, humanitarian transports, providing immediate and long-term aid - material, psychological, legal and financial to the unemployed, homeless, sick, the elderly, to children from poor families and to immigrants and refugees. Apart from Poland, Caritas Polska is also active in countries like Syria, Iraq, Libya, Jordan Nepal, the Ukraine, Belarus, Kazakhstan, Sri Lanka, Ecuador, in South Sudan and many other locations. It cooperates with Caritas Internationalis and Caritas Europa for international projects.

Caritas Polska has been helping in Syria since 2013 by financing hospitals, delivering food, medicine, clothing and money for electricity and water. Caritas Polska is currently running the biggest public aid project for Aleppo residents in Poland, by providing long-term support for 4200 families living here. It also helps Syrian refugees in Libya and Jordan. To this date, over PLN 8.5 million has been donated.